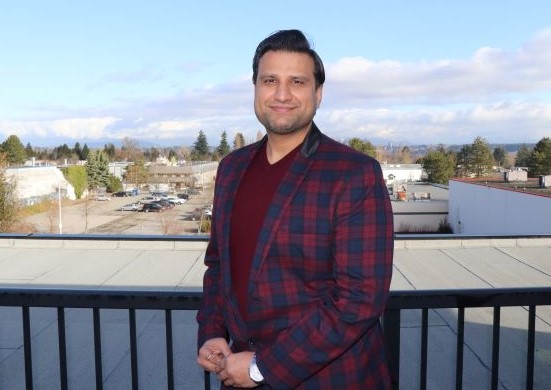 Harsh Thakkar is an RBC Top 25 Canadian Immigrant of 2020

Harsh Thakkar, manager of DIVERSEcity Interpretation and Translation Services, is one of this year’s RBC Top 25 Canadian Immigrant Award winners

Multiculturalism is one of the things Harsh Thakkar loves most about Canada. But it comes with its share of challenges, like language barriers, which can keep newcomers feeling left out. That might explain why Thakkar, head of DIVERSEcity Interpretation and Translation Services in Surrey, B.C., is so passionate about communication across cultures. “Language should never be an obstacle for anyone in a country as diverse as Canada,” says Thakkar, who is one of this year’s RBC Top 25 Canadian Immigrant Award winners.

Thakkar oversees a team of more than 300 interpreters and translators who help clients communicate, especially in the health care and court systems, in more than 88 languages. Under his leadership, he has grown the business to include rare languages, Indigenous languages and even American Sign Language (ASL). “We are proud to be a designated provider for provincial and municipal government interpretation and translation needs,” he says.

And the kicker is that it’s all for a good cause. DIVERSEcity Interpretation and Translation Services is a social enterprise, certified by Buy Social Canada. That means its profits go toward the good works done by its parent charitable organization, DIVERSEcity Community Resource Society, which helps immigrants, refugees and vulnerable populations.

Knowing his work is helping immigrants is poignant for Thakkar, who came to Canada from India as an international student in 2001. He faced his own challenges, juggling his business studies with being a peer mentor, while trying to gain work experience, even though international students were then limited in their ability to work off campus. “This also made it more difficult to secure work experience points to later qualify under the skilled immigration category,” he says. “This motivated me to run for campus student representative. After winning the election, I went to the Parliament of Canada to speak about allowing international students to work off campus.”

Thakkar, who’s thrilled the rules have improved since then, says, “It’s important to stay positive in the face of challenges. The most important attribute that helped me achieve my goals is my personal drive and ‘can-do’ attitude and maintain enthusiasm even when things get tough.”

The same lessons apply in business. Professionally, Thakkar has developed a reputation as a charismatic, optimistic leader with organizations like the Vancouver International Marathon Society before coming to DIVERSEcity.

Thakkar, who also manages DIVERSEcity’s CELPIP Language Testing Centre, says he wants to continue to grow in his current role and take every opportunity to support newcomers to Canada, including mentoring international students in his personal time.

“As immigrants, we are surrounded by a lot of challenges, but don’t let those stop you from moving forward,” he advises. “A positive mindset is what’s going to allow you to succeed in your goals in Canada. Honestly, we are so blessed to be in a country where people care about each other, so all you have to do is go out there and talk with people.”

And if they speak a different language, Thakkar can help you with that!

This is the 12th year of the RBC Top 25 Canadian Immigrant Awards, presented by Canadian Immigrant magazine and sponsored by RBC.  The only national awards celebrating immigrant success, the winners are chosen after a months’-long process of nominations, judging, shortlisting and online voting. Go here to find out all the RBC Top 25 winners of 2020 including Mayor of Burnaby Mike Hurley, actor Hamza Haq and more amazing immigrant success stories.