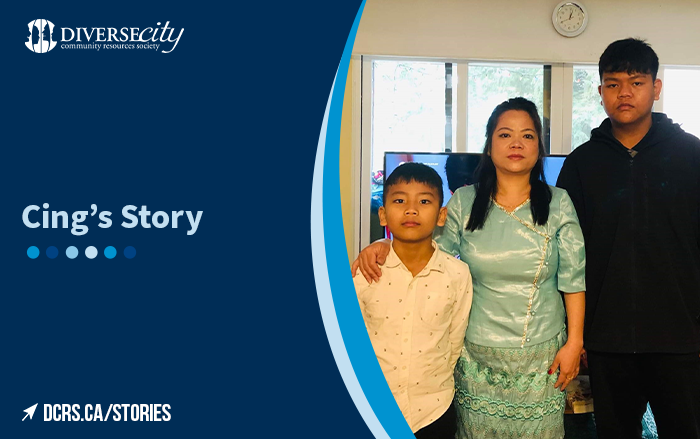 Cing and her family left Myanmar because of the armed conflict, becoming refugees in Malaysia. They lived there for more than a decade before being resettled in Canada in July 2021.

Although Cing was happy to get the chance to resettle in Canada, the reality of moving so far, leaving her relatives and dealing with the sudden death of her husband made it difficult. She realized she was going to be a single mom in a new country, facing language and cultural barriers. But she persevered, knowing that Canada would provide a better future for her kids.

Through a referral from ISSofBC, Cing was connected to DIVERSEcity’s RISE Program, and her sons were connected to the RISE Youth Program.

She was assigned a Burmese-speaking RISE case specialist who sat down with her to create a holistic settlement plan to help them all thrive.

Overall, the RISE Program helped them become more self-sufficient. Today, Cing is finishing her LINC English level 4 so that she can apply for Canadian citizenship. She also has a future goal of becoming a hairdresser.

Through her determination and resilience and the support of the RISE Program, Cing is on her way to achieving all her goals. She encourages other newcomers by saying, “Reach out to your community and settlement agencies and don’t be alone at home. There are lots of programs and workers who are willing to help you.”