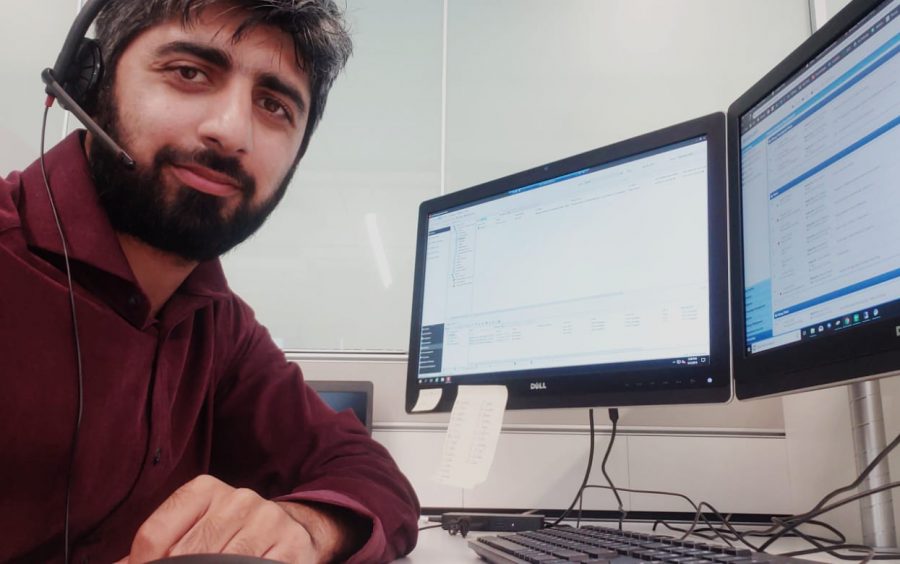 After just a few months on the job, Farqaleet Ali has quickly become one of the busiest employees at DIVERSEcity Community Resources Society. As the organization’s computer technical support specialist, he’s the go-to person for all things IT — and was instrumental in transitioning DIVERSEcity’s employees to working from home as a result of COVID-19.

“I never imagined that such a time would come when everyone would be working from home,” Farqaleet says. “When it was decided to close the Community Campus and we would all work remotely, it was a critical task to make sure everyone had the technology resources to get up and running.”

Originally from Pakistan, Farqaleet was studying electrical engineering when he, his parents and two siblings immigrated to Canada in 2016. He went back to his homeland to finish his bachelor’s degree, and returned in 2018 to settle down permanently in Canada.

But when he started to look for work, he didn’t have much luck. “Most jobs I saw in the electrical engineering field needed lots of experience, which I didn’t have as a new graduate. It seemed that the industry was saturated with enough workers.”

He contemplated returning to school to do a master’s degree, but wanted to find employment to help his family financially. He went to WorkBC and other career resources to help in his job search, but it was a post his mother found on Facebook that led him to DIVERSEcity’s Future Leaders program. After calling to get more information, he was told to come to the office for an intake meeting later that same day! “We met and went through all the requirements, and I signed up for the program,” he says.

A future leader in the making

Through this youth employment program, Farqaleet received 12 weeks of training at the Academy of Learning in a related field to his degree – information technology. In addition, he attended employment and life skills workshops at DIVERSEcity and received job search help from the Future Leaders team.

Vandna Joshi, manager of the Future Leaders program, says, “DIVERSEcity’s Future Leaders program funded by Service Canada has been supporting youth (15-30) for the past 14 years. Farqaleet’s success is a testament to our belief that once youth get the skills they need, there are unlimited opportunities for them to access. We are proud to have one of our own Future Leaders graduates on our team at DIVERSEcity; he has done amazing work in these very challenging times.”

Farqaleet adds: “The Future Leaders program was the base of everything for me in Canada. It gave me the confidence I needed. I also got to meet many other new immigrants in the program going through different experiences. The program gave us the opportunity to learn how to deal in the Canadian work environment.”

Farqaleet worked there for eight months, until a merger led to some company layoffs — including his job.

But he wasn’t back to square one; he had the tools and training to quickly re-enter the job market. “That first job was a great stepping stone for me.  My colleagues were very good and they knew that I was new to Canada and new to the field, and they helped me out a lot.”

When he heard that DIVERSEcity was hiring a computer technical support specialist, he quickly applied. “I felt so happy to get a call back,” he says. “It felt like home, because when I came to Canada I started my education and career through DIVERSEcity,” he says. “What DIVERSEcity gave me, I’m now giving back.”

Find out more information about the Future Leaders program here.