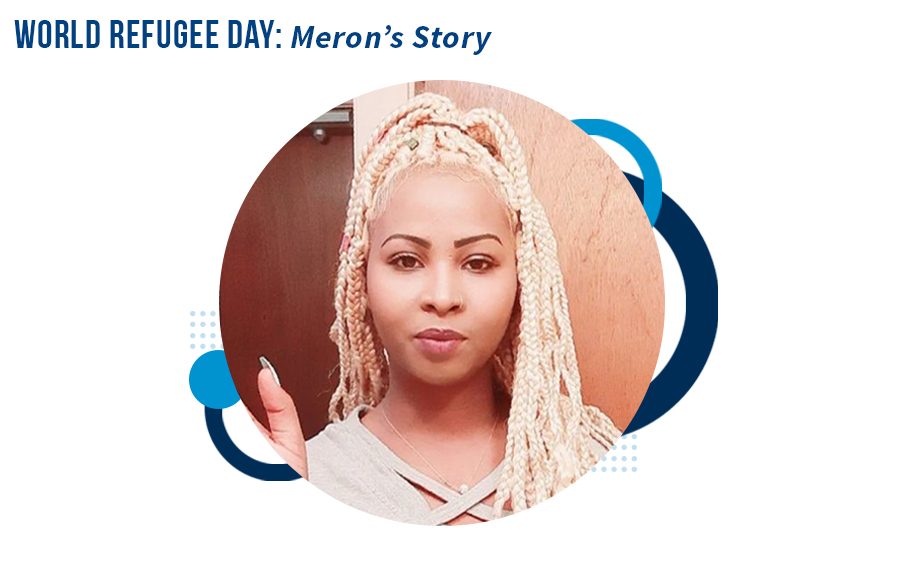 DIVERSEcity RISE Program client Meron shares her decade-long journey to Canada and the obstacles she had to overcome when she finally got here.

Before she was even 20 years old, Meron left her home in Ethiopia to go to Lebanon to become a cook. While there, she met her future husband. Unfortunately, Meron’s soon-to-be husband was undocumented in Lebanon but could not return to his home in Sudan due to the civil war in that country. With very few options left, he applied to the United Nations for help as a refugee. After they were married, Meron was added to the application and they both waited for better days to come.

Their journey to Canada was not quick. “It took us nine years to get the approval to be [Government-Assisted Refugees],” Meron says. “When we received the approval, we travelled within three months.” By that time, it was no longer just the two of them — Meron, her husband and their two-year-old son moved to Canada in December 2019.

“At the beginning, I was afraid. But when we came to the country, we were happy; everything was good. People were understanding, welcoming and cooperative,” Meron says. “Sometimes, we used to communicate with people in stores by [hand] gestures and it was working for us.”

Although she was happy, Meron still had challenges to face. For example, while she loved to go on walks, due to language barriers, she often struggled to find her way home. To help her adjust, Meron discovered DIVERSEcity’s RISE program. “[It] helped me a lot in everything. My case specialist, Suha, helped me with language support, booking appointments and clarifying road routes,” says Meron. “They also connected me to churches, community services, food hub programs, employment programs, and helped me with government applications like the BC Recovery Benefit.”

Suha also connected Meron to a clinical counsellor at DIVERSEcity, who helped her learn her rights while navigating marital conflict. Meron continues work hard toward her goals, which include finding employment, studying to be an esthetician and helping others. “I want to learn English and start helping newcomers just like how I received support from DIVERSEcity. It makes a huge impact on a newcomer’s life.”

Are you a newcomer facing multiple barriers? DIVERSEcity’s Refugee and Immigrant Specialized Experienced (RISE) Program assists newcomers to use their strengths to cope with issues and barriers, and to increase their skills and knowledge to independently settle and integrate. Connect with our RISE team via email at risereferrals@dcrs.ca.