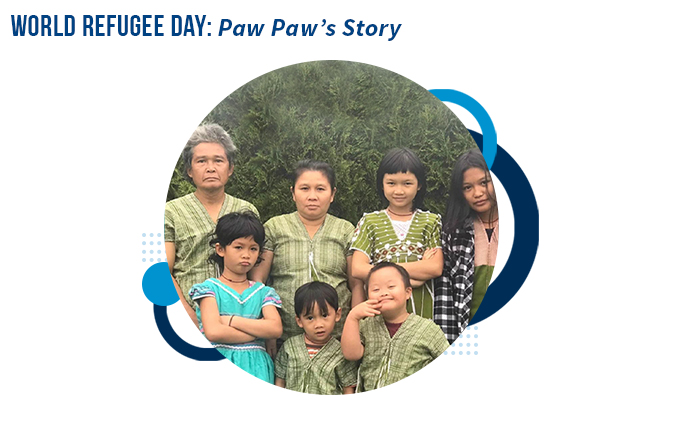 Displaced from the Karen state in Myanmar, Paw Paw and her family fled to a Thai refugee camp, before being accepted to Canada as government-assisted refugees.

It is almost two years since Paw Paw arrived in Canada as a government assisted refugee, along with her husband and five children. Born in Myanmar, Paw Paw’s refugee journey, like other refugees, was defined by the fear they flee from and the sanctuary they seek, she says with interpretation help from her Karen-speaking RISE case specialist, Herman.

“My family is one of the families that had to escape brutal military in Burma [now Myanmar] and became internally displaced people in my own Karen state before coming to a refugee camp in Thailand,” she says.

She explains that there is a growing problem of Burmese refugees, mostly from the Karen ethnic group, encamped along the Thai border, exposing the human insecurity prevailing in the neighbouring borderlands. Thailand has only recently accepted that the Karen are unlikely to be able to go back to Myanmar any time soon and it has accepted resettlement as a solution for some of them. “We were one of luckiest families to resettle in Canada,” she says. “Many of the 140,000 Karen refugees have been in Thailand for up to two decades, and the younger ones were born on the Thai side of the border and have never even seen their homeland.”

A new journey in Canada

While grateful to Canada, they did face many challenges in their resettlement journey. “It is not easy to resettle in Canada. Our journey was quite difficult. I had never travelled so far and it was a memorable journey. I had to leave my relatives behind and the only way to escape dictatorship and oppression is to make this journey toward a bright future for my children,” says Paw Paw.

Parenting in a new unfamiliar culture has been one of her challenges as a mom, she says. “And trouble speaking English and cultural barriers, and trouble with transportation, impact each and every aspects of my life as well.”

She credits Herman, her RISE case specialist, for supporting her and her family in many ways.

“He supports us by finding our suitable place to live, family doctor, accessing food program, social welfare and accessing health care. He not only assists my family alone, but lets us to enroll in external services while empowering us to become more self-sufficient. I work together with my case specialist to develop a plan to achieve my settlement goals by using the strengths, addressing needs, identifying areas of responsibility as a new parent, and ways to overcome barriers.”

Paw Paw is hard at work studying English in the LINC program and hopes to apply for Canadian citizenship in the future.

To other refugees she says, “Don’t give up. When you seek help, there are lots of people willing to help you. I have to thank the Canadian government and DIVERSEcity who welcomed us and supported us into a new country.”

Are you a newcomer facing multiple barriers? DIVERSEcity’s Refugee and Immigrant Specialized Experienced Program assists newcomers to use their strengths to cope with issues and barriers, and to increase their skills and knowledge to independently settle and integrate. Connect with our RISE Youth and RISE team via email at risereferrals@dcrs.ca.