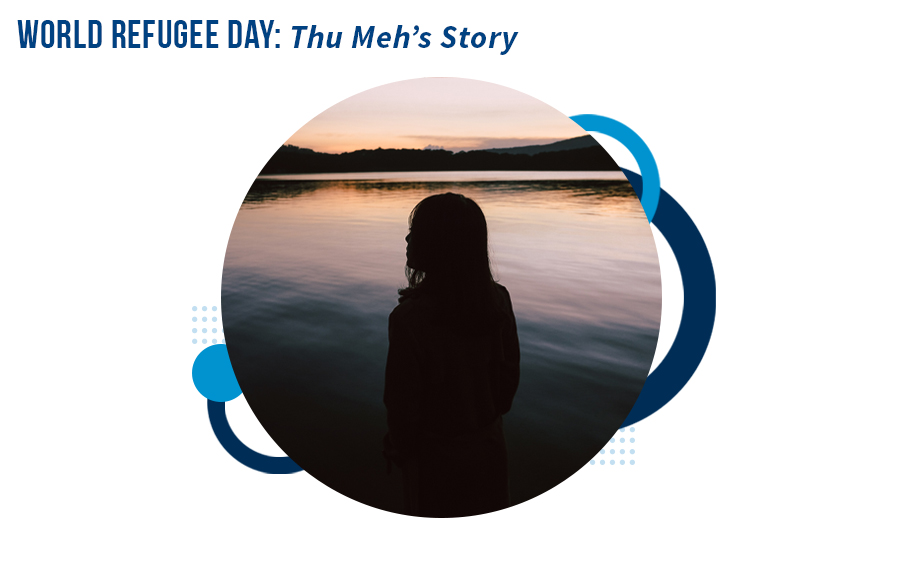 A DIVERSEcity RISE Program client, Thu Meh shares her story and struggles she faced with language, facing a completely new culture and being a newcomer in Canada.

Born in Myanmar, Thu Meh was just two years old when she and her family migrated to Thailand as refugees because of the civil war in their home country. “In the camp, my parents told me that they would have to rely on other people for shelter and food. It was a very difficult time,” she says.

The refugee camp was the only home Thu Meh would know for the rest of her childhood and teen years. The camp was controlled with strict rules, overseen by Thai soldiers, and Thu Meh and the other refugees were not allowed to leave the grounds.

“My family had to survive on NGO rations, which were not enough for our family. The resources for our family were very limited; no electricity, not enough water in the summer, no materials to build or renovate shelter, not enough foods and clothes, no job opportunities, and only unofficial education.”

At the age of 22, after living in the camp for two decades, Thu Meh, her parents and two sisters were sponsored by a church to come to Canada.

Thu Meh’s arrival in Canada felt very welcoming, with overwhelming support from the volunteers and youth workers that helped her and her family’s move. However, moving to Canada, speaking only Karenni and knowing little English, she struggled. “It is still difficult for me to adapt and integrate in the society fully because of not being fluent in English and not fully understanding the Canadian norms and culture.”

That started to change when Thu Meh connected with DIVERSEcity RISE Youth case specialist Saw Joe. Along with receiving overall support through the RISE Youth Program, Saw Joe helped her get a medical care card, access health care, and find and apply for jobs. Thu Meh was also referred to DIVERSEcity’s LINC language class, conversation circle and youth programs for further help with learning English, connecting with other youth, and getting emotional and social support.

“When I arrived in BC, I felt isolated and depressed because of a new place. I was then connected to the RISE Youth worker for help and support,” she says. “I have connected with other youths in the programs and made new friends with others at school and in the workplace. The support and guidance of the workers and teachers, helped me to increase my confidence in order for me to pursue my goals.”

Thu Meh wants to become a nurse! And, we at DIVERSEcity, know this strong, courageous new Canadian will reach her goals.

Are you a newcomer facing multiple barriers? DIVERSEcity’s Refugee and Immigrant Specialized Experienced Program assists newcomers to use their strengths to cope with issues and barriers, and to increase their skills and knowledge to independently settle and integrate. Connect with our RISE Youth and RISE team via email at risereferrals@dcrs.ca.

Photo used above is a stock photo.