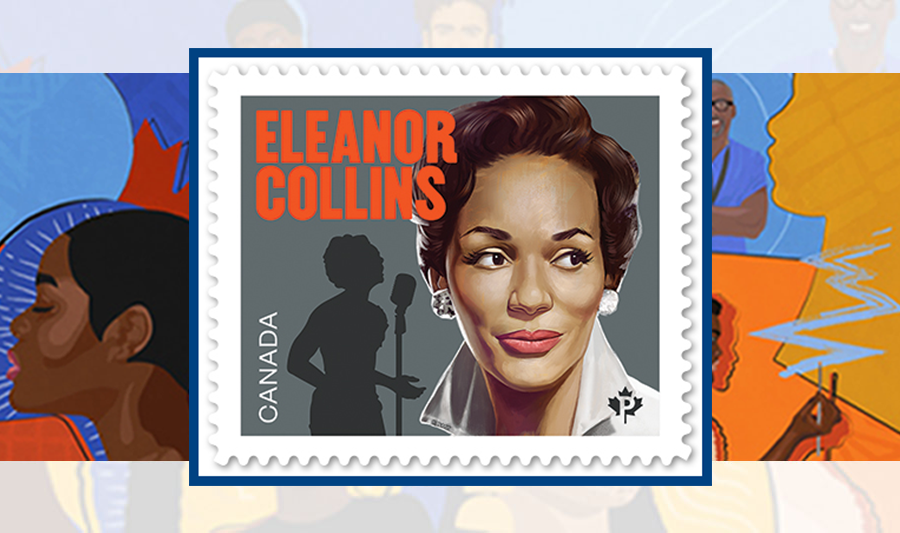 Throughout the month, DIVERSEcity will draw your attention to the life and contributions of several notable Black Canadians from different eras and areas of influence. Last week, we wrote about Honourable Lincoln MacCauley Alexander who was Canada’s first Black member of Parliament. Today, let’s turn our attention to Eleanor Collins, known as Canada’s first lady of jazz!

A resident from our own community of Surrey, BC, Eleanor Collins, 102, known as Canada’s “first lady of jazz,” graces a new Canada Post stamp (seen in image above), revealed this January 2022.

At the stamp’s unveiling, Eleanor, a recognized civic leader and pioneer in the development of British Columbia’s music industry, said: “I am grateful to be alive in this new age, for the quality of life I have somehow been able to maintain, for the lovely acknowledgements of my life and work, and for everyone who has been a part of my journey.”

And her journey has been an amazing one. Born in 1919 in Edmonton to parents of African American and Creole heritage, Eleanor grew up singing gospel music with her family.

After winning a talent contest at 15 years old, she began performing in concert venues and on radio in the 1940s. She was featured on CBC Radio with the gospel group Swing Low Quartet and with Ray Norris in the jazz series Serenade in Rhythm. She would go on to perform with other top musicians, such as Chris Gage, Phil Nimmons and Lance Harrison.

After a television appearance in 1954 on CBC Vancouver’s Bamboula: A Day in the West Indies, Canada’s first TV variety show to feature a mixed-race cast, she broke new ground as the host of a national television series called The Eleanor Show in 1955. She was one of the first black artists in North America to host a national, weekly television series.

Even though she says she didn’t realize it then, Eleanor was a pioneer of her time, both in the music scene and for fighting against racial prejudice, including challenging a petition that tried to prevent her family from moving into a Burnaby, BC, neighbourhood. She was known to use her music to try to unite people despite their differences.

“I encouraged students in music education; I belonged to the PTA and church choir; I sang at the children’s hospital, in provincial prisons, and to help support charities and civic organizations. It was my hope that I could help bridge the perceived differences that divide people,” she said to Canada Post.

In 2014, Eleanor became a member of the Order of Canada for the impact she has made.