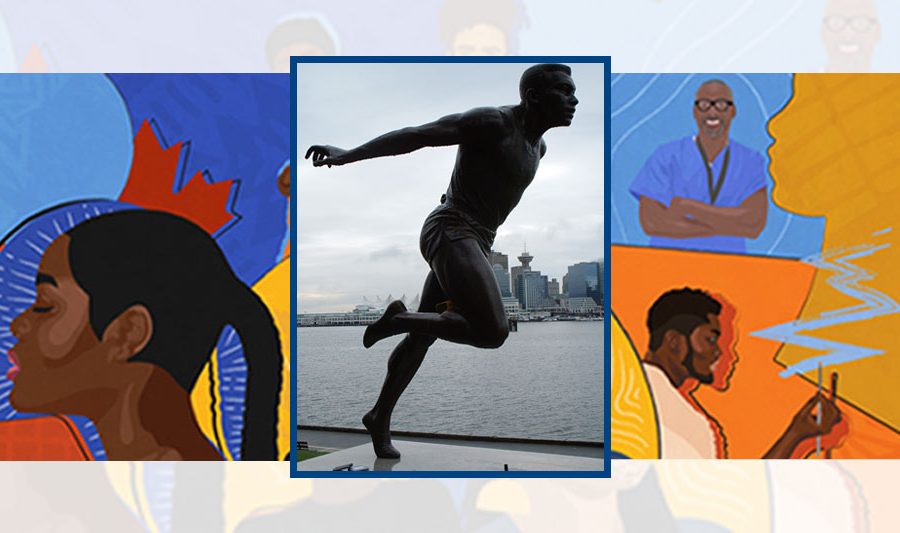 Throughout the month, DIVERSEcity will draw your attention to the life and contributions of several notable Black Canadians from different eras and areas of influence. We have written about Honourable Lincoln MacCauley Alexander, Canada’s first Black member of Parliament, and Eleanor Collins, known as Canada’s first lady of jazz! This week we turn our attention to the world of sports and champion sprinter Harry Jerome.

If you’ve been to Stanley Park in Vancouver, you may have noticed the bronze sculpture of a runner in motion. This was installed in 1986 to commemorate Black Canadian track and field sprinter Harry Jerome.

You may have also heard the name Harry Jerome gracing buildings, sporting facilities and events, and awards programs, inspiring generations of young athletes in BC.

Born in 1940 in Prince Alberta, Saskatchewan, he moved to North Vancouver, BC, as a child. The family faced racism in the neighbourhood and even violence in the schoolyard. He turned his attention to athletics and got involved in a variety of sports, including track and field, displaying exceptional athleticism and speed.

At age 18, he broke the Canadian record for the 220-yard sprint, helping him win a track scholarship to the University of Oregon.

A year later, he stunned the world by matching the 100-metre world record of 10 seconds at the Canadian Olympic Trials. He headed off to the 1960 Summer Olympic Games in Rome. But muscle injuries saw him out of the Olympics and doing poorly at the 1962 Commonwealth Games in Australia.

Despite warnings that he may never run again, Harry healed and returned to the athletic stage with resilience and determination. “Never give up” became his motto.

He returned to the Tokyo Olympics in 1964, winning the bronze medal for the 100-metre race. In 1966, he won the 100 yards final at the Commonwealth Games in Jamaica, and also set a new world record of 9.1 seconds. A year later, he also took gold at the Pan-American Games. Over his career, he set seven world records.

With a master’s in physical education, Harry became a high school physical education teacher in Vancouver. Harry was also invited by Prime Minister Pierre Trudeau to help create a new federal ministry of sport to promote the importance of sports and fitness among young Canadians.

Between 1970 and 1971, he was given the Order of Canada, inducted in Canada’s Sports Hall of Fame and was named B.C.’s Athlete of the Century.

Tragically, in 1982, his life was cut far too short, from a brain aneurysm at the age of 42. However, his champion spirit and example continue to inspire today.